Because Art Nouveau objects are becoming more difficult to find and can be worth a lot of money, reproductions are being introduced.

For buyers who would like to buy an affordable piece, webpages are offering nice reproductions :

For people buying on the internet or on auctions, spotting and identifying of good reproductions is getting more and more difficult.
Because not only the object, but also the signature is perfectly copied!

A seller is not perfect and might not have noticed that he is selling a reproduction.

Be very aware of the description in the advertisement/ catalogue.
* Style (in the style of)
* Deco (decorative)
* Att. (attributed to)

One of the experts of the Antiques Roadshow (BBC UK) once told the viewers that the best way to start is to think that the object is a reproduction and then check pro's and con's to convince yourself that it is really a copy.

If you want to inform the board members of an interesting site where reproductions are sold please do not hesitate to make a post!

A site that has some furniture (they used to have more) is Design Toscano. I have two of their Harp Side Tables and I found the construction and finish quality to be very good. Product link: http://www.designtoscano.com/product/code/AF88074.do

In a conversation I had with an importer, there are skilled people in China that can make copies of furniture inexpensively just by showing them pictures of what you want. I wonder if a lot of reproduction furniture is made this way?

I have seen websites of companies making reproduction Victorian furniture. I am going to ask them if they would consider making art nouveau styled furniture.

I received this reply from David Newton at victorianreplicas.com:

"Thank you very much for contacting me. I have two principal sources of furniture, both in Central Java. I have been working with one of them since 1990, and enjoy excellent relations and confidence in their abilities and reliability."

"The majority of our pieces are replicas of English antiques. Honduras mahogany was commonly used in the originals, and there was a large hand-carved content. Discovery of Dutch colonial plantations of honduras mahogany in Java (Indonesia) together with a wood-carving tradition provided the ideal basis for an industry which has developed over the last 30 years or so thanks to work by English antique dealers who were looking initially for replica Chippendale dining chairs. Much time and effort went into developing the carving, and later the finishing to enable the production of quality pieces."

"With this background, we are certainly well placed to supply suitable furniture designs with reliable quality."

"I would be glad to talk with you to discuss further. Please don't hesitate to call me any time."

"In the meantime, if you wish to collect some photographs of pieces you are interested in, that would be a good starting point."

"Looking forward to hearing from you!"

Thank you very much for your research!! It was very intresting to learn that copies are also made in Java.

I know that some shops are even importing containerloads of reproductions to sell on the local market and via Internet. Offcourse they are normally very reluctant to tell about the source as they are afraid that somebody else will enter in the same market.

"Your" tables are also surfacing in Europe as you can see (photo below), on pages similar to Ebay and even at auction houses (mostly indicated as Art Nouveau Style). Some of them are even asking more then the price you have paid for them! 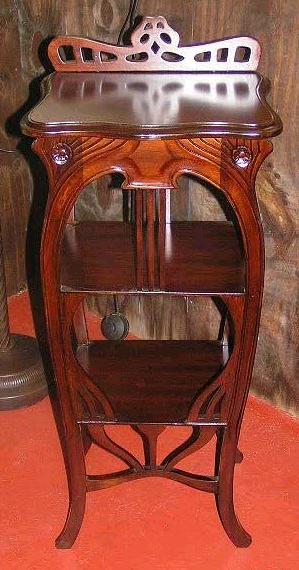 My experience is that the the countries in Asia can reproduce everything you want as long as they have an example, detailed photos or plans are normally sufficient. The workmanship and skills are still widly available in countries like India, China, Japan, etc.

European countries and America have gone for mass production, but the Asian countries countries in Eastern Europe countries are still producing according to the same technics as they did in the 18th and 19th century.

I have had a discussion at a fair a week ago about Russian Ikons, because more and more ikons are being brought on the European market. These Ikons are NOT fake, as they are being made in the villages which were founded hundreds of years ago specially for the production of Ikons , lacquer work, etc. The craftsman are still using the same material, same designs and same "machines" to produce the ikons. This makes it very difficult to date a piece and when you don't have the expertise it is very easy to buy a modern piece by mistake.

Ah, if only I could find modernday pieces being made. But so far I have not found anyone making art nouveau pieces outside of Asia these days. If you know of anyone, please let me know.

Offcourse the price level will be much higher then the reproductions made in Asia.

Hope this helps and if I find another intresting link I will offcourse post it on the forum!
Stella