On the 11th of August 1898 a Dutch gallery opened in The Hague under the English name Arts and Crafts. Important artist-designers in the Netherlands immediately recognized Arts and Crafts as the first Dutch gallery for contemporary decorative arts. The gallery presented handcrafted furniture, textiles, ceramics and metalwork of high quality alongside paintings and sculptures. The Belgian artist and designer Henry van de Velde (1863-1957) played an important role right from the start.

Arts and Crafts only lasted until July 1904, but during the six years of its existence, the gallery played an important role in the world of Dutch applied arts by showing works by Dutch and foreign modern designers and by stimulating debate about the path the Dutch revival of the applied arts should take. This debate, which pitted nationalism against internationalism, led to the creation, in 1900, of another gallery called 't Binnenhuis. Located in Amsterdam, it promoted modern design referring to a Dutch national style rather than inspired by foreign models. 't Binnenhuis would outlast Arts and Crafts by twenty-two years. 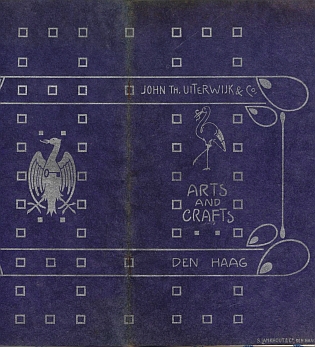 The name Arts and Crafts clearly referred to the English design reform movement of William Morris (1834-1896). On his travels through Europe, John Uiterwijk, the founder of the Arts and Crafts gallery and the friend Thorn Prikker had referred to, had seen similar galleries and workshops in England. The Arts and Crafts gallery's financial backer was Chris Wegerif (1859-1920), a relative of Uiterwijk, who had an architecture and construction firm in Apeldoorn, a wealthy town with a residential character (and a 17th century palace of the royal family) in the east of the Netherlands.